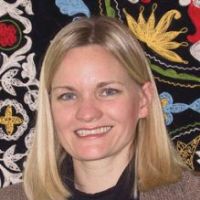 I conducted 24 months of fieldwork in a rural region of southern Kazakhstan during the initial post-Soviet transition. I argue that rural households coped with market dynamics by maintaining strong household networks through regular exchanges of gifts and labor, and that these networks should be regarded as a key aspect of their household survival strategy. I also describe the ubiquity of "gifts" and "bribes" in Kazakhstan, and argued that some "gifts" function in part as "bribes."

In addition to writing about the lives of rural merchant women, I have written about bride kidnapping, one of the "hot" gender topics for this region. I argue that this practice increased in frequency after the fall of the Soviet Union (with the rise of nationalism, corruption, and economic disruption). I also argue how discourses of shame and tradition play a role in perpetuating non-consensual bride kidnapping.

This research project includes interviews with three groups: rural residents living near the site, medical doctors, and nuclear scientists at Kazakhstan's National Nuclear Center. We argue that these groups have very different understandings of radiation's impact on human health. Our research also looks at how memories and narratives of nuclear testing have been shaped by the politics of aid and nation-building projects in the present.

Since the early 1990s, nearly half of Mongolia's Kazakh population has migrated to Kazakhstan through a government repatriation program. We argue that women are more likely than men to experience significant geographical separations from kin due to cultural preferences for exogamy and patrilocal residence. We also argue that citizenship policies for repatriated Kazakhs have shifted over time, reflecting an inherent tension between neo-liberal and nation-building projects.